Magnetic Particle Imaging (MPI) was first introduced in 2005 as a new medical imaging technique that could eventually compete against other imaging methods without any of the health risks involved. MPI uses super paramagnetic iron oxides (SPIOs) as the contrast agent, which unlike the radioactive tracers used in nuclear imaging techniques, are safely processed by the liver and do not produce any health risks from ionizing radiation. The non-linear response of the particles to a magnetic gradient field allows applications in cardiovascular imaging and possibly magnetic fluid hyperthermia for drug delivery.

The magnetization of the SPIOs is achieved by applying a magnetic field  across the length of a field-of- view (FOV). In this scan there is only one point in which the SPIOs are not saturated, the Field Free Point (FFP). At the FFP the particles rotate their magnetic poles, thus aligning themselves through Brownian relaxation with the magnetic field in place. The challenge in perfecting the quality of the produced images lies in the relaxation time of the particles. As the magnetic particles increase in size, so do their resultant signal and relaxation time. To explore the effects of the relaxation time on the resolution of MPI images, I worked with a graduate student, Rohan Dhavalikar, simulating various ferrohydrodynamic models for the relaxation of the particles. For more details, take a look at our publication in the Journal of Applied Physics.

Throughout the past year, I have been working on creating a 2D COMSOL model of an MPI machine. I have modeled the movement of the FFP and the resultant heat generation from the magnetic fluid. This model uses the Shliomis equation to model the ferrofluid, which makes the assumption that the relaxation time of the magnetic nanoparticles is independent of the field strength. By modeling the heat dissipation, we are able to obtain a temperature profile when the magnetic fluid is in a specified medium. This will help to accelerate experiments in the future by predetermining what the temperature profile should be with a specified combination of the bias field, drive field, drive field frequency, and FFP trajectory.

I have also begun to work on modeling halbach arrays, which are magnet configurations such as the two shown below, that produce magnetic fields gradients that can be used to evenly distribute magnetic nanoparticles within a medium. Each block is a magnet, and the arrow represents the direction of the magnet's field. In addition to modeling the system, a set of practical demonstrations will be conducted that will compare simulated time of diffusion to the experimental time of diffusion. These two projects will be finalized in the next couple of months to produce my undergraduate honors thesis. 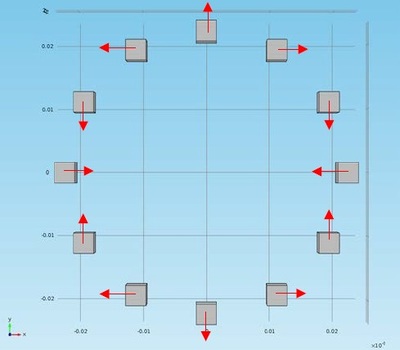 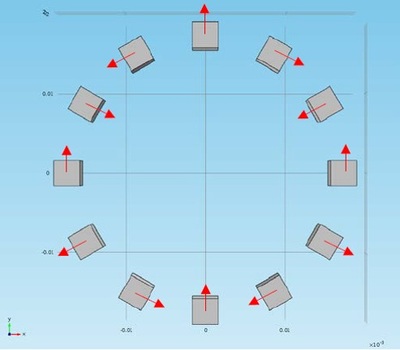 This research has been conducted in the Rinaldi lab (Biomedical Engineering) at the University of Florida. A special thanks to Professor Rinaldi for taking me into his lab as an undergraduate freshman and allowing me to explore a diverse set of topics that will prepare me for whichever project I work on during graduate school.
Powered by